I wanted to share my interview with fellow Christian author, Ginny Priz, about my battle with Infertility.  It is filled with a message of HOPE in a very desperate time.  Please share with someone who has a similar struggle or maybe just loves someone that is dealing with Infertility.

For more information, you can read my book, “Full Heart Empty Womb: How I Survived Infertility…Twice.”

Since my Dad’s Cancer diagnosis in December, my mind has been warring between optimistic and realistic thoughts.

I recall sitting in the oncologist office in early January and staring at his PET Scan. The doctor explained to us that everything that was white was Cancer. There was so much white. More white than black in some places.

Both the optimist and realist in me know without a shadow of a doubt that with God ALL things are possible. I love a big and mighty God that can erase every last bit of this so-called incurable, inoperable cancer. That is my constant prayer.

So how do I pray expectantly as I am told to do in the Psalms, when the realist in me knows that my prayer for complete and total healing may not be answered?

Danged if I know.

Ha! You thought I had the answer?? Not quite 😉

I haven’t figured that out yet, but I have found a way to have peace in a turbulent time. Hebrews 4:16 encourages, “Let us then with confidence draw near to the throne of grace that we may receive mercy and find grace in our time of need.” I do not know if God will heal my dad, but I know that He will provide my family with the mercy and grace to heal our aching hearts during our time of need. 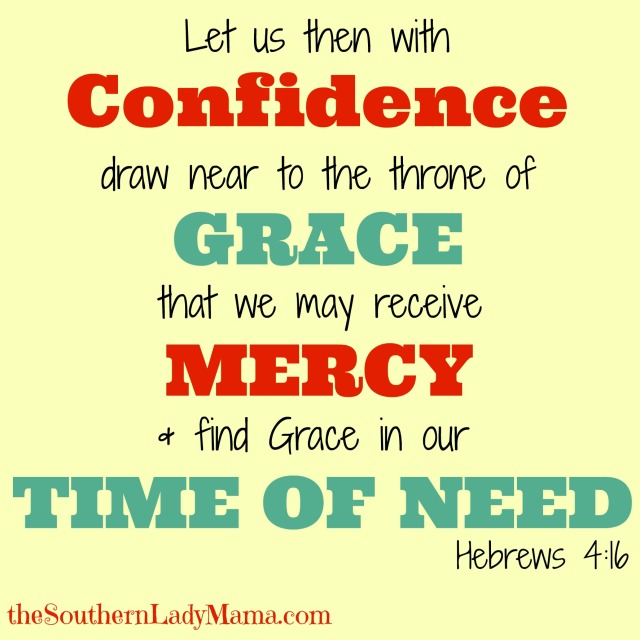 Of course we always want the ultimate prayer of healing to be answered. However, we can be so grateful for the many prayers that have been answered along the way. Dad has had minimal to no side effects in his 8 weeks of chemotherapy. We had a CT Scan of his head, neck and chest today, and it showed that his very aggressive cancer is stable. It hasn’t grown at all since he started treatment. (The doctor thinks that there is a chance that it has even shrunk a bit!) That is a HUGE answered prayer. We don’t have to hope and wait for a clinical trial. Considering that this is a very rare cancer and there is no known protocol for treating it, this is truly a blessing. We found a drug that is effective on our first try!

And then there are the blessings that God gave to us without us even knowing. The doctors believe that the origination of Dad’s cancer is from a radiation treatment he got when he was a child. What if the cancer hit him 30 years earlier? Mama would have been a single mom to two girls who would have grown up without the most amazing dad. It totally sucks that we are dealing with this now, but it would have been so much worse any sooner in our lives. (I know that isn’t very eloquent, but that is just how I feel)

I don’t know how many of you may be dealing with a crisis and your optimistic and realistic selves are battling it out in your head. How do I pray about this situation just right?? Lucky for us that God doesn’t require us to say the perfect prayer to follow His perfect plan. He just wants us to come to Him. I encourage you to pray with all your heart and soul. Be honest with Him even when it is tough and sometimes messy. He knows what is in your heart anyway.

Ask Him to fill you with His grace and mercy during your time of need.  And He will.

Life can be a series of highs and lows. My life has certainly been a testament to that. Met and married my wonderful husband Eric – High. Tried to conceive for a couple of years, failed fertility treatments, surgery – Low. Successfully got pregnant through IVF – HUGE High! High risk Pregnancy that left me on bed rest for what felt like most of my pregnancy – Low. Delivering premature but healthy twins – High/Low. Six weeks being separated from them in the NICU – Low.

I could go on and on. Today I wanted to tell you about one of my favorite Highs. He is my little Miracle High. Eric and I were told that there is absolutely no way that we could conceive. That is why we went through IVF to conceive Ethan and Ella. I have no doubt that it was indeed a fact. As I said this is a Miracle High.

Here is an excerpt from my family blog in 2008:

Ah I woke up just like the day before. I had no idea that this morning would change all our lives so much! Eric was getting ready for work and I was in bed watching Sports Center (his choice not mine). I remembered that I needed to call in a prescription that day. Before I could get it, I had to take a pregnancy test. My cycle was running way too long and I needed to get on progesterone to get me back on track. I always thought this was a funny thing for me of all people to have to do. I mean we know I can’t get pregnant. On top of that, I went back on birth control after I had Ethan and Ella. I simply was taking it for convenience sake. Eric and I often laughed about all the money we wasted on all those birth control pills early in our marriage. So off I went to pee on my little stick. Unloaded the dishwasher, sat down and watched TV for a minute. Should I get the kids up? Oh no wait….better go check the test and get that out of the way.

I walked into the guest bath and looked at the test on the sink. Double take…..was that TWO lines? Huh? I must be seeing things. I heard Eric say something, so I threw the hand towel over the test and jumped back in bed. Eric said, “Why do you look so weird?” I was still in shock so I said, “just tired.” He went back to the closet to finish getting dressed and I ran back to the bathroom for a second look. Yes. Definitely 2 lines. How did this happen??? I mean I know how it happens for most, but not us! We were told that we couldn’t get pregnant on our own. Holy cow. Eric’s birthday was the next day. Boy could I have fun with this!!! I ran upstairs to get the babies up and whispered my secret in their tiny ears. I am pretty sure they smiled.

Thankfully Eric left shortly after that. (I was told later that I was in MAJOR trouble for letting him go to work because he would have called in sick. Whoops 🙂 I quickly called my mom, my sister, and Kristen. Kristen, my personal OB nurse, reassured me that the home tests were pretty accurate. Even so I had my mom come over so I could get an official blood test at the doctor’s office. I still didn’t believe it. I went and looked at the home test again. Still 2 lines! When I called the doctor’s office to get the test they acted like I was crazy. “Mrs. Greer, we usually don’t do blood tests if you have a positive home test.” I replied, “I know, but I don’t believe it. When can I come in?” I went in immediately, got my blood drawn, and paid to have the results to me stat.

All day I was avoiding calls from Eric and his sister, Amy. How in the world could I play this one off? I couldn’t even sit down I was so excited! I finally got the “official positive” test results from the doctor. Hallelujah! Praise God!! I checked the home test one more time and finally threw it in the trash.

Now how in the world would I give Eric the total shock of his lifetime??? The way we found out we were pregnant with Ethan and Ella was so impersonal. We called into a voicemail box and listened to a stranger tell us the good news. Not that we minded one bit. We were finally pregnant!!

I decided I would get the kids Big Brother and Big Sister T shirts, take their pictures in it, frame it, and give it to Eric for his birthday. Well I am not sure how many of you have tried to get a 16-month old kid to stand still so you can get a good picture of them. Now throw in a second child. It isn’t possible. Just take it from me. So I decided the next best thing was to just wrap up the shirts and let Eric open those.

We waited on pins and needles until Eric got home. Of course since we were anxiously awaiting him, he didn’t get home until after 7. After the kids bath, Eric read them a story and they just had to give their Daddy an early birthday present. He didn’t know it, but I was recording the whole thing : )

I turned the camera off right after I told him so we could all snuggle. There were lots of happy tears all around. I was told later that Eric was thinking “Why in the world did she give me some shirts for the kids for my birthday?” Apparently what I thought was pretty plain isn’t plain to a man.

Stephanie Greer is The Southern Lady Mama. She is the blessed mama of three children. She shares a humorous look at life as a wife, friend, lady and a mama. Stephanie is the author of "Full Heart Empty Womb: How I Survived Infertility...Twice." This book chronicles her near ten year battle with Infertility and what she learned through the difficult process.